The usage of large, vertical displays is increasing in fields of research as well as in the economy. Because of their size and resolution these displays are well suited for information visualization. There already are a number of publications which examine the interaction with large, vertical displays. Yet especially the operation of magic lenses on large display walls has been mostly ignored. An intuitive interaction with magic lenses on a large display may be espesially advantageous in collaborative scenarios. Smartphones are suited for interaction with display walls because of their portability. In this paper interaction concepts for operating and parametrizing magic lenses have been developed using mobile devices and a high resolution display wall. For this purpose the current state of research has been investigated and application scenarios for the use of the concepts have been constructed. A big amount of interaction concepts have been developed which range from casual to focused interactions. For the operation of magic lenses several actions have been identified which occur in an interaction process and have to be addressed by the concepts. Part of the developed interaction concepts have been implemented by a prototype and tested with sample data sets. 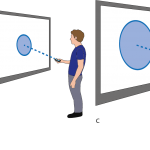 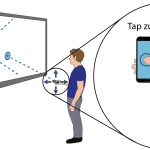 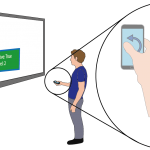 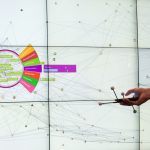