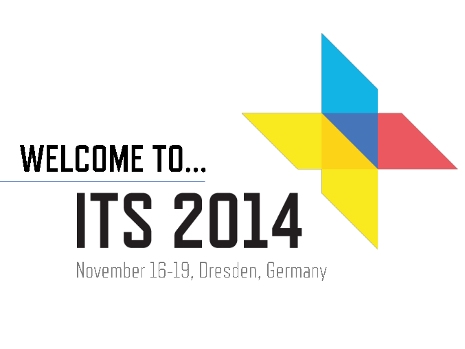 The International Conference on Interactive Tabletops and Surfaces (ITS’14) took place from Nov 16 – 19, 2014 in Dresden, Germany. As principal organizers of this years event, we were particularly keen to make these four days an enjoyable and pleasant happening. The hard work of Co-General Chair Raimund Dachselt, our team as well as all others involved has paid off. Catch some impressions of the conference at our photo gallery!

179 participants from all over the world attended an exciting program, consisting of 31 papers+notes, 23 posters, 14 demos, 6 doctoral symposium students and 4 workshops, tutorials & studios. The beginning and end of the event featured two inspiring keynotes, one by Jun Rekimoto talking about „A New You: From Augmented Reality to Augmented Human“ and another by Joachim Sauter, who presented „Sensitive Skins in Media Art and Design“, a short history of interactive surfaces at ART+COM.

Our team was also represented by a multitude of contributions. In one of nine sessions, Ulrich von Zadow introduced his touch-sensitive arm-worn display „SleeD: Using a Sleeve Display to Interact with Touch-sensitive Display Walls.“ Fabrice Matulic presented his work „Spatial Querying of Geographical Data with Pen-Input Scopes“, a pen-input and interaction style to query geographical information.

Again, a great thanks to all involved for their tireless commitment! ITS 2014 was a great success. Not to forget all our student volunteers making this event such a remarkable remembrance.